At the start Trains for Europe had two major questions: how could the European Union organise the procurement of a fleet of night train carriages, and how many carriages would you even need to run enough lines for which there is a market in Europe?

We’re still working on our own answer to the second question, but our conversations with those who work in the industry have led us to this conclusion: to make an order for night train carriages economic, a big order would be needed. Something in the hundreds of carriages. We also know from the Steer-KCW study that accompanied the European Commission’s Cross Border Rail Action Plan that there is a market for routes that would need something between 170 and 300 new carriages.

The problem however is the number of firms who could place an order for a couple of hundred carriages is low, and as our previous assessment showed, the big players – Deutsche Bahn, SNCF, Renfe, Trenitalia – have little or no intention of entering this market. The operators that might like to enter the market – most of them small private companies – lack the capacity and financial stability to make a massive order. And there are some operators – mostly in central Europe – whose aim is simply to maintain the night train routes they have, but are struggling with outdated rolling stock.

This then leads me to wonder: could a consortium be built to place an order for some more standardised models of sleeping cars and couchette cars?

I could imagine that – among the private operators – Snälltåget, European Sleeper, Midnight Trains and Regiojet could be interested in two dozen carriages each. Some of the smaller state owned railway companies – SJ, DSB, SNCB, SŽ and CFL spring to mind – could likewise be interested in enough carriages to cover the small number of night trains that could run from their countries. And then central European railways like PKP, ČD, MÁV, ŽSSK could be interested in enough carriages to replace some of their now rather ancient carriages reaching the end of their life. Put all of that together and you could quite easily reach an order of 200 or so carriages.

We have a couple of relevant examples that are similar to this idea. 6 operators – Karlsruhe (VBK), Albtal-Verkehrs-Gesellschaft (AVG), Saarbahn Netz, Schiene Oberösterreich, the State of Salzburg and Zweckverband Regional-Stadtbahn Neckar-Alb – put their heads together to make a joint order for up to 504 tram-trains (Stadler won the contract). A standardised product and joint procurement lowered the cost per unit.

Going further back there is the interesting example in the 1970s of the voiture standard européenne, a standardised design of passenger carriage. 500 of these were ordered by DB, ÖBB, FS, SNCB, CFF and SNCF, and financed by Eurofima.

Were both private and state owned companies to be invited into a modern consortium, Eurofima could not be the funding mechanism this time, but the Green Rail Investment Platform of the European Investment Bank could. It is also not impossible to imagine that a leasing company – the likes of Railpool, Beacon or Alpha – could be the coordinator of such a consortium, also then leasing the carriages to the operators.

There would of course be some downsides to this approach – the order would have to be reasonably standardised, so operators might not get all of what they want. But they would get more of what they want, and at a better price, than if they all were to make separate orders. And the situation would be much better than currently, where all operators are using any old stock they can lay their hands on.

Who I wonder could coordinate such a consortium? The European Commission? A leasing firm? A reasonably capable railway company? 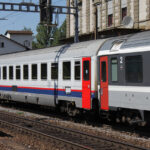