Our demand: that the EU organise the procurement of a new fleet of night trains.

This will allow cross-border overnight services to be swiftly scaled up.

The problem: the companies that could provide international night trains in Europe (Deutsche Bahn, SNCF, Trenitalia, Renfe, PKP etc.) currently have no intention of doing so, while the smaller companies that would like to provide these services (RegioJet, European Sleeper, Snälltåget etc.) do not have the means to do so.

There are very few night train carriages (rolling stock) available on the leasing market, and what is available is often very old.

So the way to scale up night trains is to procure new carriages, and to allow operators to lease these.

This is a Europe-wide problem – as pretty much all the important and viable night train routes are cross-border. Hence we demand that the European Union steps in to solve the problem – the EU has to set up the framework to allow the procurement of a fleet of new night trains.

Trains for Europe is not a train company, but a campaign. It is not about why night trains are a good idea, but about how to scale them up. It is founded by Jon Worth, long time blogger and commentator on EU transport policy and is independent of all railway companies and operators. The priority is that new night train connections run, not who it is that runs them.

The case for night trains

Climate change is real. Travel is a good thing. But climate-neutral planes, or fully electrified car fleets, are a long way off. So that means more travel by train over long distances, and less by car and plane.

But long distance travel by train is time consuming, so it’s better do it at night.

You can read more about the case for night trains here.

More detail about the campaign

How the campaign will work is explained in more depth here.

Our initial assessment is that the EU would need to assure the procurement of at least 50 new night trains – this would allow routes like these to be run, and we also explain how the procurement of such a fleet of trains could be organised and why the EU should act on this. We advocate tried and trusted technology, easily manufactured by many different Europe-based manufacturers, and hauled with readily available locomotives. The trains would have four classes of accommodation (including couchettes and sleeping cars) and – at least initially – run on standard gauge tracks. We have some more radical ideas further into the future too, but for now let’s stick to what is achievable, and achievable now.

More detail can also be found in our Project Proposal, including how our demands would be refined further into the campaign. 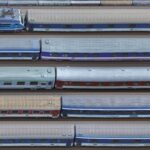