Rather than ordering new trains, there are two other potential solutions: to lease night train stock that already exists and is not being used, or to convert daytime train stock into night time train stock, but neither option is really viable at scale.

What night train stock is there to lease?

Night trains in Europe have been de-prioritised for years, the low point coming in 2016 when Deutsche Bahn left the night train business altogether. By this stage many of the trains used for night time services in Europe were already upwards of 40 years old, and in a poor state. Old carriages had been steadily scrapped, and few new night train carriages have been manufactured in the past two decades.

That means that the amount of stock available for lease hire in Europe is very limited. Night train startup European Sleeper has partnered with RegioJet (that owns small numbers of three types of night train stock – see this, this and this), and Moonlight Express has partnered with RDC (that has a small pool of stock). Heros likewise has a small pool, but the availability of what is lists here is not known. Snälltåget and Vy have snapped up pretty much all of the remaining stock.

There could theoretically be some Talgo night train stock parked up in Barcelona (pictured above), and possibly some SNCF couchettes parked up somewhere (some are currently being renovated). Other countries where night trains used to be more prevalent than they are now – Croatia, Romania, even Russia or Belarus? – might likewise have some extra stock hanging around.

But to all intents and purposes, any useable night train stock on the leasing market in Europe is already in use. Scaling up night trains needs more than this.

What about converting daytime trains to night trains?

As the night train carriages Trains for Europe has specified in its minimum requirements are similar – in terms of the size and characteristics of the carriage – as daytime train stock, could daytime trains be converted into night trains? ÖBB is currently in the process of converting 20 daytime carriages to mini-cabin couchettes.

The availability of daytime stock is better than for night time stock, especially in Germany. Deutsche Bahn even has an online portal listing what it has available, much of it parked up currently at Mukran, Hamm and Leipzig. Pictures from the ground are scarce, but this is all of it on Google Satellite (Mukran left, Hamm right).

DB has four types of 200km/h InterCity carriages with automatic doors currently listed – R186.x dating from 1988-90, R294.x dating from 1976-1985, R856.0 dating from 1977 and R857.5 dating from 1983. Numerous other types dating back as far as 1969, but with slam doors, are also available. With the right partner to convert these (earlier German rail startup Locomore contracted CFR Grivita in Bucharest to rebuild its daytime carriages and Flixtrain employed Talbot in Aachen to rebuild its carriages, and Pesa and Newag in Poland, and Electroputere VFU in Romania, offer renovation services too), there might be an opportunity here – although whether rebuilding 30 year old carriages for this purpose would make sense would need further investigation.

In short: there is some potential in re-building daytime carriages, but not enough to scale night trains to the extent Trains for Europe advocates. 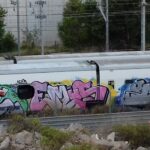 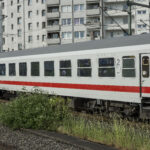