Trains for Europe simply cannot work in Ireland (its rail network is not connected to any other in Europe) or in Malta or Cyprus (no railways). Non-EU countries Albania, Bosnia and Herzegovina, Kosovo, Montenegro, Norway, North Macedonia, Serbia, Switzerland and Turkey are however potentially included.

Portugal and Spain, and Finland, Estonia, Latvia and Lithuania (and eventually also Belarus, Moldova, Russia, Ukraine) are complicated due to railway track gauge, although modern high speed lines are partially alleviating this – for more on these cases see the page about track, and about gauge changing trains in the list of additional features. Even running on standard gauge high speed lines in Spain is complicated – as 200km/h night trains approaching Madrid for example would mix with early morning high speed 300km/h daytime services, making timetabling difficult, while use of the old Iberian gauge network requires a gauge changing train. That is why for the moment only Barcelona and Bilbao, and not Madrid, Seville or Lisbon are included.

The big issue is the United Kingdom. It is not included at the moment, because of Brexit and the Channel Tunnel.

The Channel Tunnel poses a series of operational complexities that Brexit exacerbates that are too complex to overcome. Passengers’ luggage has to be scanned before boarding a train bound for the UK, and passports also have to be checked before a train enters the tunnel – and UK Borders does not allow this to be done on board the train. Brexit means that customs controls are required as well. This would mean disembarking all passengers for luggage and passport checks in Lille or Calais – hardly comfortable! And if that could be overcome, the approval process for a new train to operate through the tunnel – especially one that is a locomotive and carriages as Trains for Europe advocates, rather than distributed traction – would be complicated, and once the train were on the UK side timetabling it on HighSpeed 1 to London – with the night train at 200km/h and Eurostars at 300km/h – would not be simple either.

So what’s the solution, short term?

Develop Brussels as a hub for night trains. Disembark from a Eurostar onto a night train there, or vice versa. With tickets and timetables aligned to make that possible and simple! 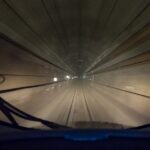