Last week the European Commission published its long awaited “Action plan to boost long distance and cross-border passenger rail” – you can download the 18 page PDF document here, and there is also a summary of the proposals here. The action plan was based on a much longer piece of work – a study entitled “Long-distance cross-border passenger rail services” produced by consultancy companies Steer and KCW for the European Commission. This one runs to 476 pages and can be downloaded here. Brussels EU politics news site Politico Europe also asked us for comment about these proposals – their write up is here.

I wrote up my first reactions to the Action Plan in this Twitter thread:

It’s worth reading that in full – it explains the gist of each part of the report, and these comments also drove some of the wider Twitter discussion. The essence is this though: there is nothing in the action plan that is wrong, but at the moment it is too early to judge what the overall significance of the proposals will be. The devil is likely to be in the detail of follow up proposals due to be released in 2022.

With regard to night trains in particular, a couple of points stand out. There is the announcement – together with the European Investment Bank – of the Green Rail Investment Platform, a kind of one stop shop for loans that can be used for rolling stock investments. There is the idea of “go-everywhere” passenger rolling stock specifications to be developed in cooperation with ERA in 2022, and a revision of the Technical Specifications for Interoperability also in 2022 – these Specifications have caused problems for the introduction of new trains, so simplifying rules here makes sense. There are also ideas that the EU – probably through the ERA – should play a greater role coordinating track access charges, and also some efforts to look at whether a process to streamline cross border Public Service Obligation contracts is a good idea (not our concern here at Trains for Europe, but some night trains campaigners are very pro this idea).

All of this gets interesting when you read the Action Plan together with the more detailed work produced by Steer and KCW. Buried away on P. 52 of the PDF (note this is Page 52 of the document – their page numbering system is strange!) there is this map of potential new night train routes: 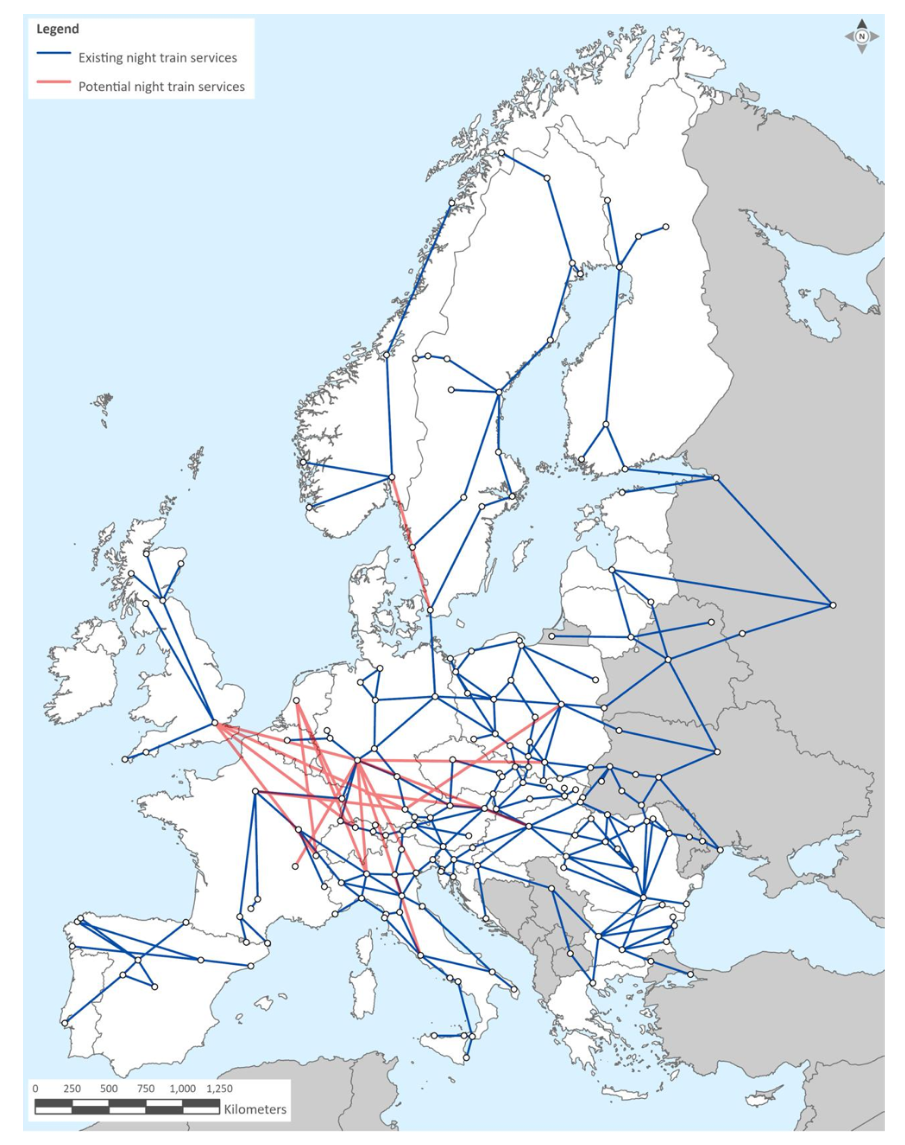 On page 21 of the PDF they state that “these 11 additional routes could require 170-250 couchette and sleeping cars”.

When you delve into the details you can quite easily find some major errors with the Steer KCW methodology, in that it is heavily based on passenger numbers between pairs of airports (hence why there are 7 night train routes from Frankfurt!) and also seems to be able to find no way to re-activate routes that have been cancelled in recent years (like Paris-Barcelona).

But the crux here strikes me as useful: there is even using their heavily airline passenger structured model, enough night train traffic to run 11 cross border night train routes, and for that at least 170 carriages would be necessary. That conclusion would seem to me to be solid, and even somewhat on the conservative side. And with a greater role for the EIB foreseen in rolling stock investments in the future, there might just be enough here to begin to unlock these problems.

So, overall, both report and action plan strike me as a glass half full – there is nothing here that is going to revolutionise night train travel in Europe right now, but there is hope for steady improvements looking towards 2022.