Plans for the rejuvenation of night trains in France are proceeding – the news this morning from France’s Minister of Transport is that new routes with new rolling stock will be launched in the period 2026-2030. You can read more about the plans in Ouest France here.

But there’s a catch…

The routes Transport Minister Djebbari and Prime Minister Castex have talked about are:
Paris-Briançon
Paris-Nice
Paris-Rodez and Albi
Paris-Latour de Carol
Paris-Tarbes, Bayonne and San Sebastián (Spain)
Paris-Perpignan, Cerbère and Barcelona (Spain)
Paris-Toulouse, Montpellier and Marseille (not sure how this is supposed to work!)
Luxembourg/Metz and Strasbourg and Genève-Nice and Barcelona and Bordeaux
Bordeaux-Nice

These routes are all so relentlessly focused on France!

Only Genève, Luxembourg, San Sebastián and Barcelona even get a mention outside of France’s borders. What about Belgium, Netherlands, Switzerland, Italy, Germany? And even in France, what about Lille or the whole of the west / Normandy / Brittany?

There is supposedly the aspiration but notably not a plan to connect France to Madrid, Copenhagen and Rome, but no actual plan as to how do that.

The details of how all of this will happen in France sounds like a copy-paste of our detailed plans! Here are the quotes from Djebbari, translated:

“I intend to ensure that new rolling stock is developed”, which would be “delivered between 2025 and 2030”, underlined the minister. It would include some 300 cars, around 30 locomotives and two workshops, representing an investment of “at least 800 million euros”.

“To finance them, the best option is for the state to contract one or more leasing companies, which will control and manage the rolling stock,” he said.

“The procedures could be launched at the beginning of 2022, for new night lines from 2026,” said Jean-Baptiste Djebbari.

But here he and the French government – not least ahead of the French Presidency of the Council of the EU in 2022 – are missing a trick. What France needs is pretty much what every potential night train route in Europe needs. 200km/h sleeping cars, couchettes and sleeping cars, hauled by multi-system electric locomotives. What Djebbari is advocating is what we at Trains for Europe are arguing for.

So why not Europeanise all of this?

If every country does its own thing, we’re likely to end up with a patchwork of night train services and each country paying over the odds per carriage for a smaller order, rather than making savings at scale by making a larger combined order. Plus were these carriages designed for interoperability from the start it would allow a more flexible deployment of the carriages medium term. We even have a precedent for something like this – the Voiture standard européenne from the 1970s. 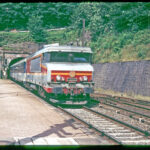